Part 2: What Nobody's Telling You About Channel Bonding

In the second part of this three-part blog series, we strip away the hype and expose hidden details that WLAN vendors gloss over, or perhaps leave out.  Our aim is to tell you what to expect from 802.11ac in the real world and how best to migrate to it as your device population shifts to 802.11ac. If you need to catch up or look ahead, you can find the other parts here:

Part 1: What Nobody's Telling You About 256-QAM

Part 3: What Nobody's Telling You About Wave 2

WHAT IS CHANNEL BONDING?

Before we get into 80MHz and 160MHz, let’s first talk about what is channel bonding? By simple definition, channel bonding is the single biggest performance multiplier and is the foundation for WLAN vendors’ claims of 1.3 Gbps speeds for Wave 1, and from 2.3 Gbps for Wave 2 up to 6.7 Gbps when using all 8 spatial streams. Channel bonding is also known as Ethernet bonding, but it is used heavily in Wi-Fi implementations.

Let’s go a bit further, though. Can you actually use 80 MHz and 160 MHz channels in your environment? Let’s explore deeper to find out.

We can discount 160 MHz right away. For most enterprise deployments this is useless. As you can see from the chart above, in North America there is only one 160 MHz channel available, and in Europe only two. This renders 160 MHz only useful for point to point WAN links. But what about 80 MHz?

You know from the 2.4 GHz days, that planning dense coverage is a bear with limited channels. Close proximity of cells using the same channel causes performance degrading co-channel interference. Thankfully that problem is less of a concern today, now that most devices support 5 GHz, and 2.4 GHz is simply considered a “lifeline” service for legacy devices.

However, 80 MHz channel bonding returns to that same problem. With only 4 or 5 channels available (depending on your region), it is difficult to plan a dense deployment of APs, because you must reuse channels in nearby cells. Without meticulous power management, you will create co-channel interference, which degrades performance and negates much of the expected gain from the bonding. As we mentioned in part 1 of this series, the top data rates of MCS 8 and MCS 9 are much more susceptible to low signal to noise ratio. The same is also true for bonded channels. So, to get the benefit of 80 MHz bonded channels and 256-QAM, clients need to be within 10-15 feet from the radio. 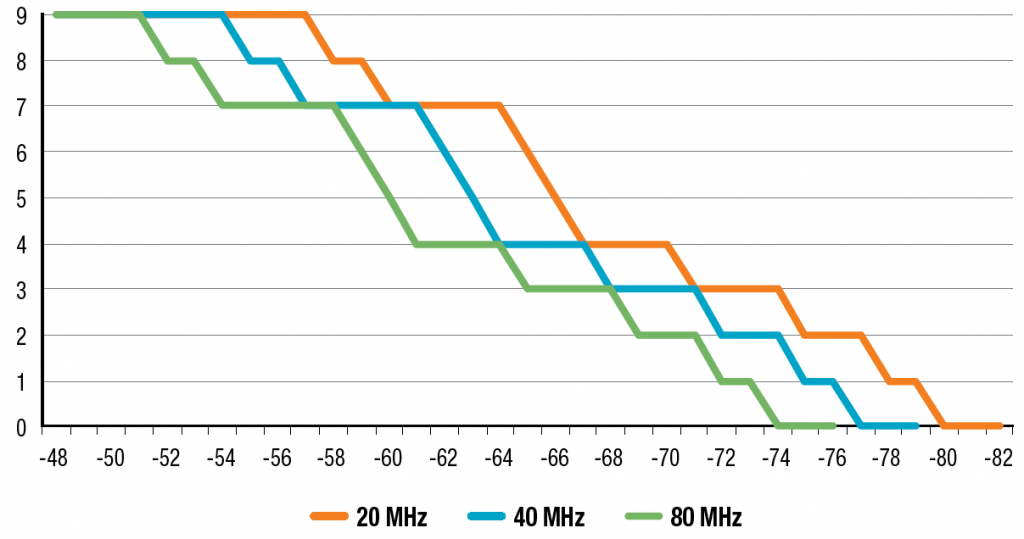 Where to Use 80 MHz Channels

Can you use 80 MHz wi-fi channels everywhere? No! However, 80 MHz has tremendous value in two key applications: mesh backhaul and bridging (point to point and point to multipoint). In both cases you have AP talking to AP, and depending on distances, you can fully utilize the advanced features of 802.11ac. If you are using 802.11n for either of these use cases today, this is the first place to start. You can easily double the performance of those links overnight. In client access however, the benefits of 80 MHz are more elusive.

For client access, one of the most practical uses for 80 MHz channels is in isolated high-density Service Areas such as a lecture hall, lobby area, cafeteria, or conference center, where most clients have clear line of sight to the AP. Here, it is feasible to buffer the 80 MHz radio from the next major hotspot by surrounding it (above and below) with radios on other access points using non-overlapping 40 MHz or 20 MHz channels. Bear in mind that a 20 MHz channel overlapping the 80 MHz channel will basically render the 80 MHz channel useless, while a client is transmitting on that channel.

Consequently, careful channel selection and maximum channel separation is crucial to reduce the noise floor and prevent 80 MHz transmissions from being blocked by overlapping channel use on nearby APs. To the chagrin of some AP vendors, you must also disable automatic channel selection and interference avoidance schemes, because 802.11n APs may not be able to recognize an 802.11ac 80 MHz channel correctly resulting in a switch to a channel that overlaps 80 MHz, in order to avoid radar or microwave emissions. 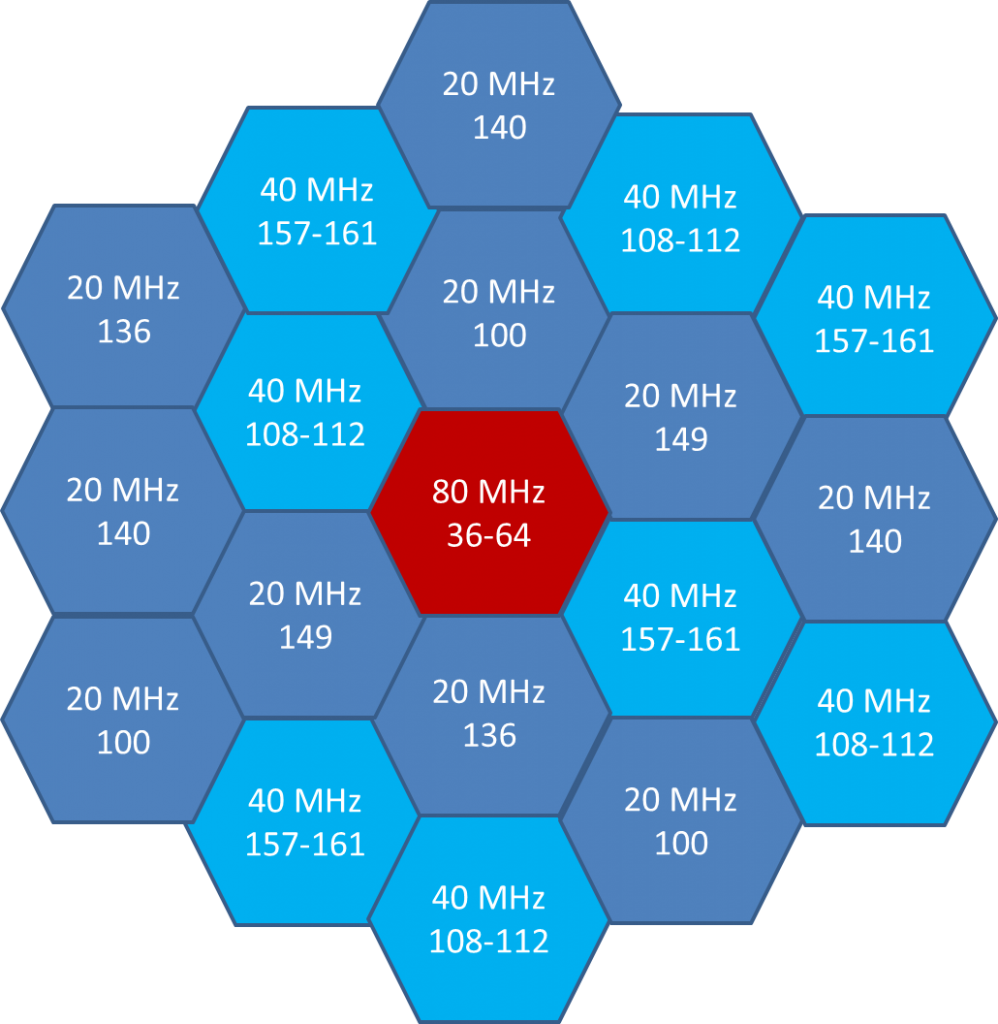 Excluding hotspot scenarios, 40 MHz is generally the better option. With eight 40 MHz channels available in North America and nine available in Europe, 40 MHz is more practical. But this is not a leap over 802.11n, since 802.11n also supports 40 MHz channel bonding. Nevertheless, you should be looking to migrate your channel plan to 40 MHz, if you have not done so already. For high density deployments where you want high-performance everywhere, such as in offices, residence halls, hospitals and where there is no one central place where everyone aggregates, 40 MHz provides a greater ability to re-use channels which allows for more cells closer together. That means you can scale capacity, without necessarily improving performance.

HOW 80 MHZ CAN WORK AGAINST YOU

While most 802.11n and 802.11ac clients support 40 MHz channels, not all 802.11ac clients support 80MHz channels, and no 802.11n clients can support it. So when an 802.11n client connects to an 802.11ac radio using 80 MHz channels, what happens? The radio drops down to a 40 MHz channel or 20MHz for that connection depending on the capabilities of the client. Obviously this means that during all communication with non-80 MHz clients, a 60 MHz or 40 MHz slice of channel capacity is going to waste. Unless you implement channel sharing (see cautions above), it cannot be used in another cell, as it is reserved for 80 MHz channel use. Therefore the merits of using 80 MHz are wholly dependent on your client mix, which is a moving target. In fact, if the mix is less than 30% 802.11ac / 70% 802.11n, then 80 MHz actually works against you, and you would have gained more capacity by utilizing two 40 MHz channels instead of one 80 MHz channel.

Now that we’ve answered your questions surrounding “What is channel bonding?” and offered some advice on the benefits of 40 MHZ, you can continue on with this series. In the next part, we look at the additional features in 802.11ac Wave 2, namely MU-MIMO and additional streams, and discuss how and where you can practically use them.