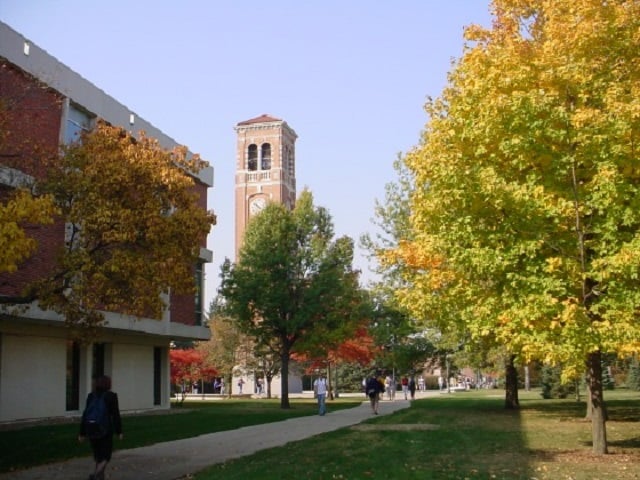 Today’s university students carry multiple mobile devices and expect to be able to connect seamlessly to wireless networks. As a result, many institutions of higher learning, both public and private, are struggling to keep pace with growing bandwidth and connectivity requirements given limited technical resources and constrained budgets. The University of Northern Iowa (UNI) has only one network engineer focused on wireless who cannot be everywhere at once to troubleshoot transient Wi-Fi issues. Problems went undiagnosed, leaving the perception in certain high density areas that wireless performance was chronically poor.

UNI implemented our Wi-Fi Performance Management System to capture the real-time data needed to address Wi-Fi performance and connectivity problems. Wi-Fi sensors called Sapphire Eye units were installed in the student union, a couple of high-density classrooms and one dorm.

The solution relieved the pressure on UNI’s wireless network engineer to try to troubleshoot problems as they occurred. Historical performance data enables UNI to resolve intermittent issues and focus efforts in ways that deliver maximum benefits. The data also supports the business case for wireless upgrade projects.  UNI has also been able to address performance and connectivity issues campus-wide and take steps to ensure that its infrastructure will be capable of supporting growing numbers of users and devices.

Technology plays a key role in the university’s vision of preparing students for success in a rapidly changing world. In recent years, wireless networking has become an increasingly critical component of UNI’s technology framework.  “Wireless usage has surpassed wired usage — we have at least three times as many wireless users as wired,” said UNI Network Engineer Chris Alman. “It’s much higher than that in the dorms. Wireless is the primary medium for access to our network, the Internet and many of our on-campus resources.”

As the sole network engineer responsible for wireless, Alman faced the daunting challenge of responding to Wi-Fi problems across the UNI campus. He needed an automated solution that could help identify and troubleshoot wireless issues as they occurred.

“The frustrating thing about wireless performance issues is that they’re transient,” he said. “We might hear from an instructor that there was a wireless problem in class, but there was not a lot I could do to see what had happened. Our class periods are 50 minutes and it might be 30 minutes into class before there are enough people online for the problem to occur. By the time I could get there, everyone would be getting ready to leave and the problem would have gone away.  “My director and I looked at products that provided network performance metrics but nothing really met our needs. Then I found 7signal on one of the blogs I follow and we reached out to them. We put 7signal Eyes in areas where we were having a lot of complaints about wireless.”

Getting the Right Data

The 7signal solution provides UNI with a way to monitor and graph trends in usage and proactively know when issues occur. 7signal also captures detailed WLAN performance data, which helps the
university understand how best to focus its efforts in order to achieve the greatest performance gains.  The 7signal solution provides detailed reporting and dashboards that present detailed performance data in a logical way.  “Out of all the different types of data that 7signal gives me, I can give my CIO and director the information they care about. I like the reports that graph the data over time. They show what performance was like in a particular classroom a year ago and what it is like today, for example. It gives us a dashboard view of performance — green is good, yellow is questionable and red is bad — which allows me to communicate the issues and benefits to management.”

The data provided by 7signal has helped Alman justify initiatives to upgrade and improve the wireless infrastructure in various areas of the campus. He can show hard data regarding increased usage and performance and connectivity problems.  “We were looking to do a wireless refresh in one of our residence halls, and the department manager couldn’t understand why we needed to replace access points that were only five years old. Their perspective is buying infrastructure equipment that lasts 20 years,” he said. “I needed to present a business case and 7signal’s graphs helped show how traffic has increased over time."

Most importantly, the 7signal solution has helped UNI resolve its wireless network issues and improve the perception of Wi-Fi performance across campus. “When there’s a problem, people tweet about it. We try to follow up with those users on Twitter and they don’t ever get back to us,” said Alman. “Being able to have a device out there that’s collecting data for us is tremendous. I don’t have to be sitting in a certain place at a certain time
trying to define what the problem is. By having 24x7 data we can show that in the middle of the night the performance is great because there are no people there, and measure the impact of filling a classroom on the wireless performance. That enables us to resolve these issues.”

Click below if you are ready to see a demonstration of Wi-Fi performance management in-action.