Cellular indoor coverage is a common problem.  To address the issue, a cellular operator has a few different options. First, they could increase the base station's output power. However, this quickly leads to an unbalanced radio link and an increase in co-channel interference, because when the terminal receives a good signal level from the base station but base station does not receive a sufficient signal back from the terminal, then your connection problems remain. Other potential solutions include redirecting the base station antenna, adding more base stations, and finally, you can build-out indoor coverage with a distributed antenna system (DAS) or with more indoor base stations.  But none of these are quick and simple alternatives.

To address the issue of low indoor signal strength, you can also use indoor cell phone signal boosters. Their job is to receive the cellular signal and then amplify it. Different technologies exist and some of them utilize the 5 GHz U-NII frequency bands for internal system communications. This is problematic because not all of them play by the same set of rules as Wi-Fi. Keep reading to understand how.

Our customer received an automated Wi-Fi performance alert from the 7SIGNAL system indicating that access point beacons were no longer detected.  The chart below illustrates this perfectly as the Beacon Availability KPI went from 100% to zero.  It's important to recognize that the customer's WLAN controller software was not able to detect this.

As a next step, we took a closer look at the Noise Monitor in 7SIGNAL as a quick and simple way to detect an increased noise floor. As you can see in the chart below, the Beacon Availability alarm corresponds precisely with a dramatic increase in noise on certain channels. Something is blasting the spectrum on a large swath of channels so hard, that not even beacons can cut through the noise. 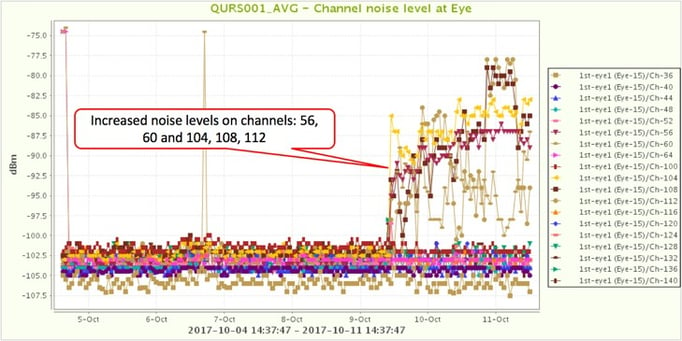 We use RRM as general term here for Radio Resource Management. We are NOT referencing any specific Wi-Fi vendor. Our customer was using RRM, as recommended by their WLAN vendor.  Most Wi-Fi access point vendors promise that with RF automation enabled, APs will automatically change channels when they detect interference. However, as seen in the chart below, the system indicates that the access point had remained on channel 60 despite the high noise level.

What About a Spectrum Analyzer?

With only a spectrum analyzer, it’s difficult to say whether this new energy is just busy Wi-Fi traffic or something else, because the bandwidth looks similar to 40 MHz Wi-Fi channel. A nice benefit of 7SIGNAL is that is runs a periodic spectrum test throughout the day and night and stores the data for later analysis. Below is a waterfall spectrum graph which shows a significant RF power increase on channels 56-60. The access point named LWAP-04, which is the one that originally alerted our customer with a Beacon Availability alarm, uses channel 60.  In fact, the spectrum analysis also shows another band with a similar increase, but luckily in this case, there are no nearby access points using that channel.

The Sapphire Eye 2100 uses an array of six 60-degree directional antennas with spectrum analysis. Therefore, with the help of antenna directivity, the source of the interference can be located. An integrated compass allows for correlating antenna numbers with the customer's office layout. With this technique, it's clear to see in the spectrum chart below that interference is strongest between antennas 1 and 5.

At this point, all the network engineer has to do is go to the location and make a visual inspection. When he does, he finds a Cel-Fi cellular repeater is being used for indoor cell phone signal boosting.  Not known to our customer... the Cel-Fi repeater found uses the 5 GHz band to communicate between the Network Unit and the Coverage Unit. It also has an output power of 115mW (20.6 dBm).  More importantly, it uses a proprietary technology which does not follow the Wi-Fi Listen-Before-Talk principle.  As a result, it blasts the spectrum continually and the channels are heavily loaded with energy that cannot be decoded by a Wi-Fi transceiver.

Due to the high non-Wi-Fi energy, the access point in the area holds back sending its beacons. Even if the beacon is occasionally sent, it’s completely corrupted by the high energy levels in the same band. So, no Wi-Fi service is possible on that channel near the indoor cell phone signal booster.

Wi-Fi performance is also degraded in the surrounding APs that are using the impacted channels, because if a client cannot detect beacons from the nearby AP, it will try to use the next best AP. This leads to low signal level, poor connection quality, and roaming problems.

"The good news is that these two devices can live in harmony by using these steps:

Here are some links to some 7SIGNAL whitepapers that you may also find helpful: