Antennas are probably the most undervalued and poorly understood elements in WLAN networks. Many times, critical networks are designed with aesthetic aspects as the main driver. No wonder Wi-Fi network performance is such a disappointment in so many places.

Radio wave propagation is a complex thing. Radio waves propagate, attenuate, reflect, refract, bend and sum up in or out of phase, all at the same time. Antennas are the devices that send and receive energy from the air and there are always antennas at both ends: at the wireless access point and at the client terminal.

End user terminal antennas have completely different requirements than Wi-Fi access point antennas. Since terminals are usually very limited in their size, antenna gains are typically only available from the access point.

When you emphasize aesthetics over function when placing and selecting access points and antennas, you run a major risk of poor Wi-Fi performance. Terminal antennas are usually isotropic because orientation of a mobile device can vary so dramatically. Due to constraints with space and cost, these types of antennas may even attenuate signals instead of amplifying them. In addition, many handheld devices usually do not support MIMO technologies. 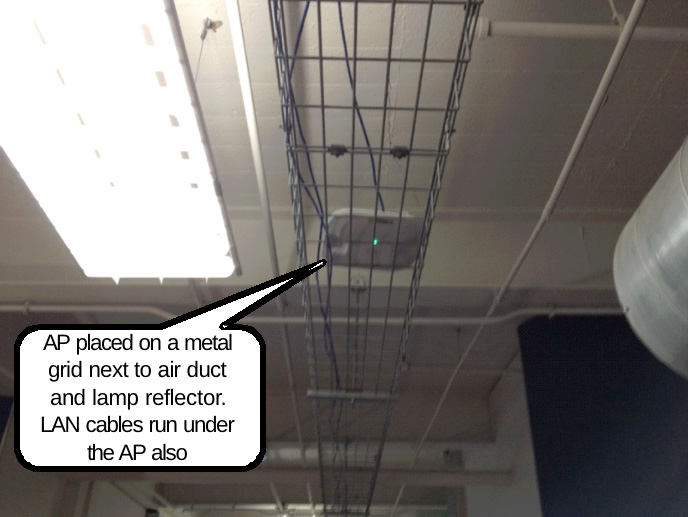 The illustration below is of the resulting Wi-Fi antenna pattern due to misplacement of the wireless access point in the picture above. Immediate proximity of the radiating element to metal causes a change in antenna impedance lowering antenna efficiency. Nearby metal surfaces alter the radiation pattern, cause reflections as well as multi-path propagation.

Antennas are typically tuned for resonance for the operating frequency, creating an electro-magnetic near and far field. Antenna near-field exists in the close proximity space between the radiating element and the ground plane. Antenna near-field behavior is very different from far-field, the normal antenna operation area.

Near-field spreads out from antenna elements and thus, materials that are close by have an impact on them. This is similar to an experience we all have encountered when tuning to a radio station. The signal was strong when your body (mostly water, high relative permittivity, ɛr) enhanced the tuning of the radio. The radio station was clear when you were next to it or even touching it, but when you moved further away, the station faded. As such, the antenna is thus detuned and its capability to receive and send energy are altered. Antenna gain quickly becomes attenuation.

Antennas have the following key characteristics:

However, how many of these characteristics are taken into consideration when planning? Minimizing footprint and visibility should not take precedent over these. In well performing Wi-Fi networks, antennas are visible and close to the end users.

There is a good reason why cellular carriers build so many mobile network antenna towers…and with the antennas exposed!

The primary emphasis with antenna design and selection should be simple: to target or point energy towards users as well as receive energy from users. At the same time, the goal should be to avoid sending and receiving energy to/from non-targeted areas.

In 2.4 GHz WLANs, the importance of Wi-Fi antenna characteristics is exceptionally high because there are only three independent channels to rotate between. Therefore, it is better to not create a lot of non-targeted coverage. Also remember that end user terminal signal strength at the access point does not improve by increasing the access point output power.

Another common error is the belief that a passive site survey will ensure reliable WLAN operation for years to come. How can this be achieved if the survey is only measuring the access point signal strength at the end user terminal and for only a tiny period of time? (~100ms per location)