Advantages of Workstation on Wheels

The US market for Workstations on Wheels (WoWs) has flourished hand-in-hand with electronic health records (EHR). Ever since public and private healthcare providers were mandated to demonstrate “meaningful use” of electronic medical records (EMR) in order to maintain Medicaid and Medicare reimbursements.

Being able to access medical records at the bedside is a key productivity enabler, and it improves the quality of care as well. In the not so distant past, nurses and care providers had to depend on memory and paper – walking approximately 4 miles on average per 12 hour shift, from nurse station to patient and back to the nurse station for the next assignment.

Over the last decade and more, Wi-Fi has changed all that. Putting mobile voice and data in their hands, on their hip, or around their neck. Enabling them to access patient records, find information, locate and communicate with others, while on the go. They still walk 3-4 miles per shift, but now it is mostly from patient to patient, and this improved workflow has impacted patient care greatly.

However, carrying a medical tablet everywhere you go, has its limitations. In order to use your hands to treat a patient, dispense medication, or use other medical equipment, you have to put it down. And to read it, while doing something else, you need to prop it up. Every tablet user knows this is not always practical.

Also, because they need larger batteries and need to be drop-proof, medical tablets are considerably heavier than consumer-grade tablets and prolonged use can lead to a condition known as Muscluoskeletal Disorder (MSD) among caregivers, which is sadly ironic. In fact, some studies have shown a 40% increase in MSD among caregivers, due to entering EHR data on mobile devices.

Finally, until fairly recently battery-life on medical tablets was not sufficient to last a full shift, and that required swapping out devices, and always having a rack of devices on charge. So hospitals needed a lot more inventory of medical tablets. The same goes for Wi-Fi phones and communicators too, from companies like Vocera.

How WoWs Have Evolved

Workstations on Wheels or CoWs (computer on wheels) as they were once known, are nothing new. They have been around for ages, but they were very expensive. More recently however, as computer and screen technology has improved and prices have fallen, WoW prices have fallen with them.

Ergonomically designed WoWs offer many advantages over medical tablets, and they are fast becoming the norm for EHR at the bedside.  Although many are unpowered, relying on hot-swappable batteries on the computer, the majority have both batteries and a power cord, so they can be charged on-demand from time-to-time as needed.

WoWs have many other use cases beyond EHR

There are hundreds of different things that caregivers do on their patient rounds, in addition to handling medical records. These require other equipment, apparatus and medications, which would normally be brought to the bedside on a standard non-computerized medical cart.

Because of this, Workstations on Wheels suit many more use cases than medical tablets, because they have a convenient surface to put things on, and can stock medical supplies and medications.

The large screen and hand-free operation, also makes WoWs very practical for use in telemedicine and remote consulting and examining radiology images.

And they can have various accessories, such as a barcode scanner for reading a patient’s wristband, to verify their identity. While this is also feasible with medical tablets, it is far less practical.

Another application for WoWs is dispensing medication. Medication errors are well documented in healthcare, and they are the cause of adverse reactions including morbidity in a few tragic cases. About 11% of these errors are attributed to dispensing errors: the wrong drug, the wrong dose or the wrong time. WoWs equipped with a series of locking drawers and integrated with the EHR system can be used to ensure accurate medication administration.

For all the reasons above, and considering that nurses spend between 20 to 30% of their work time simply documenting patient interactions, and health status, ergonomically designed Workstations on Wheels are a much preferred alternative to medical tablets. Equipped with a full-sized keyboard and mouse, most WoWs are height adjustable. All of these features maximize the ergonomics and comfort for the caregiver, whose well-being in the workplace should never be discounted! 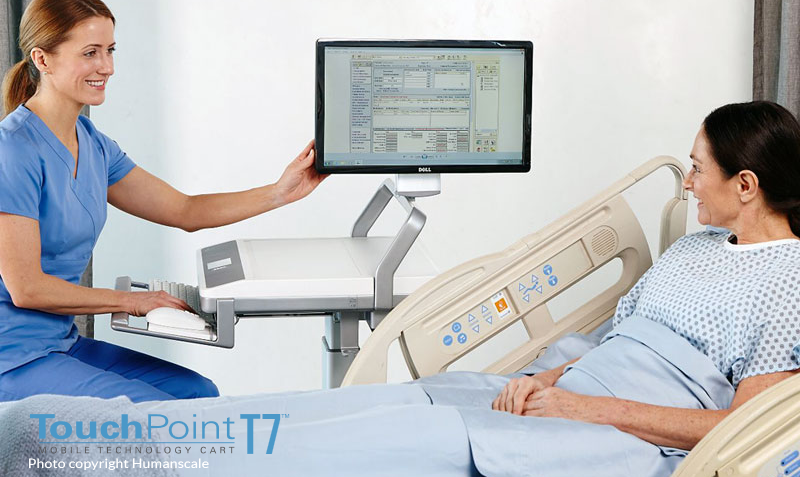 As shown in the image above, some even have a screen that can be rotated and shown to the patient so they can check their own record with ease, without having to give a mobile device to a patient.

Workstations on Wheels have become indispensable for all of these and other purposes, eliminating thousands of hours of wasted time walking from one part of the hospital to another. Today, about 95% of US hospitals and 60% of other medical practices take advantage of WoWs in one form or another in their everyday operations, and they continue to deploy more and more each year.

But for all these benefits, WoWs are only as good as the Wi-Fi service they depend on.

Wi-Fi Requirements for Workstations on Wheels

Like any emergent technology, Workstations on Wheels have raised the bar for healthcare facilities. This is a natural consequence of any new technology – particularly those involved in the exchange of critical information. When new capabilities become common, as those provided by WoWs have, the surrounding ecosystem must be set-up to support it without fail.

Consider a nursing ward where the staff have adapted their patient workflows to using WoWs in most patient interactions. They are no longer equipped to respond the old-fashioned way, by taking notes and entering them at the central nurse’s station. Hence, if the hospital Wi-Fi is really slow, or worse has dead spots at certain bedsides, everything falls apart and patient care and satisfaction is impacted.

So ensuring consistent Wi-Fi performance 24 by 7 is a critical success factor for WoW deployments. However, this is easier said than done, because Workstations on Wheels are just one of a myriad other devices that could be competing for Wi-Fi service at any point of care.

After education, healthcare has always been one of the largest users of Wi-Fi networks – globally accounting for around $1.4B annually in equipment and services. And the trend continues with vigor, partly fueled by rising demand for Internet of Things enabled medical devices which is projected at over 28% CAGR through 2020 according to recent analysis from Grand View Research.

In truth, it is not like IoT is a new phenomenon in healthcare. From heart monitors to location tracking devices, hospitals have used remote patient monitoring and equipment monitors in a variety of forms for many years, long before the IoT term was even coined.

But nowadays, as IoT device agents using aggregation protocols such as MQTT and IoT analytics frameworks have become mainstream, it is considerably easier to IoT-enable almost anything. As a result, the IoT-enabled medical device market is exploding – placing additional demands on the underlying Wi-Fi network infrastructure that must carry all that data.

Pervasive though it is, the marriage of healthcare and Wi-Fi has never been smooth sailing for three main reasons.

First, despite frequent leaps Wi-Fi speeds and capacity, hospitals can hardly keep up with the demand for Wi-Fi services as demonstrated by 20%+ CAGR in almost every area of healthcare IT from IoT devices, to medical tablets to Workstations on Wheels to patient Wi-Fi services.

In the case of IoT devices the problem is two-fold. The sheer number of medical devices being added to the network, and the ambient traffic they generate. Although the amount of data from each device is small, keeping all those devices alive, especially if they are moving, consumes a lot of airtime.

Also because of the sensitive nature of some of these devices there is a tendency for the number of SSIDs to bloat, which is a sure-fire way to erode Wi-Fi airtime even more.

The second challenge is the high bandwidth use cases. For years, the resolution of medical imaging has been improving on a logarithmic trajectory. Today a hospital’s picture archiving and communication system (PACS) gobbles up many terabytes of storage every day. At 5-20 Mb per slice and 300 slices per scan, we’re talking several gigabytes to pull a full series of images from an MRI or CT scan to a WoW at the point of care.

Video usage is on the rise too. In the form of telemedicine, remote consulting and of course the biggest of user all: patients and guests with their tablets and smartphones. It doesn’t matter how you segregate patients and clinical staff from a security perspective. At the end of the day, they all share the same air.

Sure you can throttle-down the public, and prioritize mission critical applications. But only to a point. If the Wi-Fi is unusable by patients and they can’t stream Netflix, you won’t hear the end of it. They’ll be nagging the nursing staff non-stop, even though there is nothing they can do about it.

Hospitals are Harsh Places for Wi-Fi

The third and most difficult challenge for Wi-Fi is, and always has been, the environment. Just like sports stadiums and warehouses, hospitals are notoriously difficult to plan Wi-Fi in. But not for the same reasons, at all.

Hospitals are some of the most sophisticated buildings on earth. Hidden behind the those innocent pastel blue walls and ceilings are thousands of miles of copper and ducting for numerous independent services, including air, water, oxygen, positive and negative ventilation systems, phone system, fire and other alarm systems, sprinkler systems, distributed antenna systems for 900Mhz E911 service, auxiliary power… and many more. And, oh yes, there’s Ethernet too.

Inside the rooms there is an array of other equipment all throwing off electromagnetic interference in one form or another. You’ve got lead-lined doors in radiology and elevator shafts all over the place. You name it they’ve got it. What this boils down to is reflective surfaces, and unpredictable attenuation from room to room. Quite simply a horrible RF environment where dead spots are hard to eradicate, and equipment, like Workstations on Wheels, and people are on the move, all the time.

How Much Bandwidth Do You Really Need?

Because of the diverse applications from medication to remote consulting, hospitals should plan to have a minimum of 6-10 Mbs of bandwidth available for every WoW and medical tablets at every point of care. To plan for this, you need to take into account all the other likely users in a particular area.

We touched on how to do this in a white paper entitled 802.11ac Migration: Real-World Best Practices back in 2015, suggesting that 6Mbs was a reasonable bandwidth SLA to shoot. Nowadays, perhaps a little more is appropriate. But planning for 6Mbs everywhere is one thing, and demonstrating that you are getting it, is quite another.

In a hospital setting with so many rooms and nooks and crannies, it is impossible to conduct regular site surveys using spectrum analyzers. If you really hope to maintain acceptable performance and not leave undetected dead-spots, throughout the facility you really need to automate this.

For if you don’t, and users start finding they can’t connect or it takes forever to render a patient’s X-Ray. Then it is already too late, the network has already adversely affected either efficiency or patient care or both. So how do you do this, so that you can proactively detect trouble spots and mitigate them before they begin to impact care providers and patients?

This is what 7SIGNAL’s Wi-Fi performance management platform is designed to do. You can use it to proactively run performance tests wherever Workstations on Wheels and medical tablets are used, and compare the performance results against pre-defined SLAs. Mobile Eye agents are available for all common operating systems used in medical tablets and WoWs, so you can perform those tests continuously from the actual devices being used by medical and nursing staff every day, in every place they go.